The 2015 Medieval-Renaissance Music Conference, held at the Université libre de Bruxelles, was one of the largest in number of attendance. Although the possibility of not being able to meet everyone I wanted to was high, instead I found many opportunities to enjoy the company of many of my European and American colleagues throughout the four days that we were together.

I participated in a two-part session on the Ars nova, engaging with the use of Philippe de Vitry's motets within the English treatise, Quatuor principalia. This being my newest research project, I suggested ways in which Vitry's motets (especially his Gratissima) could have been familiar among scholars of theory at the time in a different way than just through music concordances that we have available today. My introduction to a newly transcribed motet O vos omnes from Durham C.I.20 proposed that the ten French/English motets included in this source should be looked at more carefully to better understand the presence of Vitry in England. I will be presenting a more detailed version of this paper at Yale in November for the International Symposium on Philippe de Vitry. My full abstract for the paper presented at Med-Ren can be found here.

Aside from the rich and informative paper sessions which took place across the sometimes six parallel sessions, some of the highlights of the conference were the times that we gathered with Belgium beer (or Czech wine during the reception!) in our hands to discuss recent findings and generally catch up with each other since the last conference. It was nice to have a chance to form ideas for new projects and to learn more about those that are midway or have been completed. This year, I especially enjoyed two new strategies which the conference organizers adopted: lightening paper sessions and cocktail hour poster sessions. Both allowed for a more prominent exhibition of short papers and project posters that have been in the past placed at the margins of the conference program. I very much hope that this style of presentation will become the norm for the conference as we progress into the future.

The final hours of the conference were spent in the Royal Library where Ann Kelders presented various manuscripts treasured here. I, along with my colleagues working closely on the 14th-century repertory, especially enjoyed investigating the Brussels Rotula in person and up close (with a magnifying glass!). Of the many highlights, in many ways this hour or so in the library was perhaps one of the most exciting of the week. 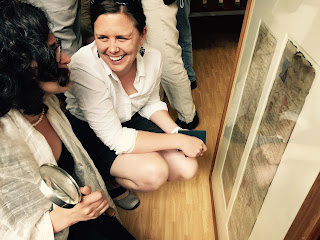