I have been silent on my blog for over a month, but that has definitely not meant that I have had little to report here - simply that I have been involved in so many different things, I am finding it more and more difficult to find time to comment on them here. But, having a quiet weekend in Wales, one of my last weekends here for a while, I have had time to reflect upon what has been an entire year of non-stop academic and musical activities. 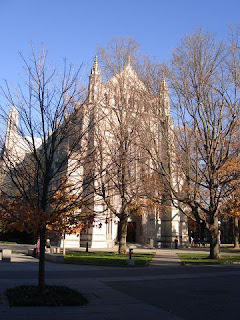 I have been wanting to write of my trip to Princeton University at the beginning of November since I have returned but, as I am currently writing a full report of the conference for the journal Early Music, I will not put too much here. From 3-6 November, I spent three days with some of the most exciting scholars who study and research music from the late middle-ages. Our host, Rob Wegman (Princeton University), provided us with a venue and amenities to discuss the current state of scholarship for music written from 1100-1300, a time that saw amazing changes in notation and compositional structure which has influenced Western music as we know it today. From discussions of motets and clausulas composed in the 1240s to a better understanding of our own modern interpretation of medieval music, the papers at the conference spanned a wide range of intelligent discourse on material which is anything but easy to comprehend. One of the highlights of the conference, aside from the sandwich and coffee breaks in-between papers (!), was the concert in the University Chapel, 'A Virgin Has Born a Flower', led by the wonderful vocalist, Carolann Buff (Princeton University). Music for this concert was directly taken from the sources which continued to take central place throughout the papers in the conference, W1, F, Mo and Hu. To be able to hear the music live through some amazingly talented singers was more than enough to reassure my curiosity and enthusiasm to know more of this beautiful music. I found conversations with my colleagues more than encouraging and felt honoured to be among a community of strong, intelligent and enthusiastic musicologists who are dedicated in the study of some of Western Europe's earliest music

While I was visiting the east coast, I made the best of my time and visited both Yale University and Wesleyan University. At the latter, I presented a seminar on music notation, focusing on the innovative and creative aspects of composers, both medieval and 20th century music. It was such a delight to have a lively conversation with the students there who all thoroughly engaged in the sometimes challenging aspects of thinking beyond what 'conventional' means to us.

An evening at the New York Philharmonic listening to Bernard Haitink conduct Strauss Don Quixote and Beethoven Symphony no. 6 was more than a thrilling experience. The beautiful narrative in Strauss' music and the subtle yet extremely purposeful sounds found in Beethoven's symphony will definitely remain as one of the best concert experiences I have had (though hearing the Czech Philharmonic in April perform Beethoven at the Rudolphiniam is still probably one of the highlights of my year!). 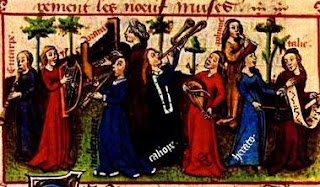 Future engagements are already keeping me busy. On 10 December, I will be participating in the second performance of Cornelius Cardew's treatise at a conference designated for the celebration of his works. More information, including the registration form and programme can be found here. As a scholar, I seem to never be out of excuses to write papers to present these days. My next speaking engagement is at my alma mater, Bangor University, where I will be giving a paper entitled Walter of Evesham and his Nine Ladies: Explaining 'musica' in Medieval England. This will be given as a part of the seminar series run by the School of Music on Tuesday 24 January 2012. All are welcome.