I made my way onto Google this morning to do a search on a medieval topic to discover that today is Alexandar Calder's 113th birthday. It was Calder's moveable sculptures which inspired Earle Brown to 'move' beyond the restrictions of conventional notation and develop graphic notation which released performers from certain restrictions and boundaries that notation dictates. 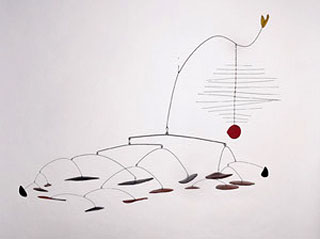 Below is a portion from a chapter in my Masters' thesis, 'Writing Sound', which describes the influences of visual art to music notation.

Visual Sound
The World of the Visual
To discover new ways of notating musical ideas, avant-garde composers turned to the visual arts.  Working post-World War II, abstract painters in America desired to escape connections to their past to establish new methods of describing their own heritage – a heritage which sought to be disconnected from mother countries in Europe.[1] Some composers experimented in the merging of American ideologies with European traditions, while others took abstract ideas not connected to any previous form of musical expression and created something entirely new.[2] For the composers associated with the school of artists, the escape from European traditions dominated their creativity. To seek inspiration in discovering their own voices, the composers turned to an artistic medium which had not been previously applied to musical notation: the visual art.
Borrowing from other mediums of art, especially from visual art, is not unusual in the creation of new forms of music.  In the late nineteenth- and early twentieth- centuries, composers were inspired by visual art to create works of musical compositions.  Claude Debussy is known to have been highly influenced by visual art: William Turner’s seascapes in the composition of La mer (The Sea)[3]  and his piano composition Images (Pictures)[4] were works in which he consciously made a connection between visual art and music.   However, visual arts had never been applied as a means for developing a form of notation as it did with the avant-garde composers.
In the opening statement of the lecture presented in in 1964, Brown commented on the state of notation and the creation of music at the time:
What is being challenged by recent developments is not music itself but the concept of what is “art” in music today and this is, rightly so, a constantly recurring problem which indicates that the art is still vital and alive.[5]

This is in alignment with a general question being asked by many artists who worked in the early twentieth century: ‘what is art?’[6]  The traditional means of relating musical ideas seemed to stifle the creativity of avant-garde composers:
It is well known that notation has been a constant difficulty and frustration to composers, being a relatively inefficient and incomplete transcription of the infinite totality which a composer traditionally ‘hears’, and it should not be at all surprising that it is continuing to evolve.[7]
Change was inevitable in their minds in order to proceed and continue to make artistic progress.  The experiments in music notation expanded the possibilities of music, not only in its written form, but also in its creation, performance practice, and acceptance by audiences.
Morton Feldman composed what became the first music composition which completely strayed from any traditional forms of notation: Projection 1.[8]   Composed in 1950 for solo cello, the score contains squares and rectangles to indicate duration of pitch and its articulation.  The symbols he used included ‘P’ for pizzicato, ‘A’ for arco and a diamond shape for harmonics.[9]  The rise and fall of the squares and rectangles designate the melodic contour of this composition. The only indeterminate element of the score is an indication of specific pitches.  This work breaks free from traditional notation and experiments with a completely new method of conveying information, leaving many aspects of the resulting sounds to be determined by the performer.
‘December 1952’, Folio, 1952 by Earle Brown is often considered to be the first truly graphic notation which broke free from any traditional European forms of notating music, allowing the performer to determine any interpretation (example 4.1 Earle Brown, December 1952, New York, found in Erhard Karkoschka Notations in New Music (1972), p.91).[10] Brown’s work goes a step further than Feldman’s in the concepts of indeterminancy and chance.  ‘December 1952’ is significant among other graphic scores as it discards traditional concepts of notation on multiple levels: the score contains thirty-one dashes, rectangles and lines of various widths and lengths which are to be interpreted as musical ideas; the composition is to be performed by any instrument, any timbre, any pitch and any rhythm, leaving interpretation solely to the performer.[11]  The score is also not intended to be read from any one direction.  However, the placement of Brown’s signature can be interpreted as an indication, at least, that this is the bottom of the score.  Never-the-less, there is no starting point, so to speak, or end of the work, allowing for a musician to start from any direction, completely escaping the tradition of reading music from left to right.  If it were not indicated as so, the score could be mistaken as a work of visual art rather than a musical composition, as it resembles much of the art which was being created at the same time.[12]
It is no surprise to read directly from Brown’s lecture that his major influences in developing a new form of notation came from the visual artists.  Resemblances between the two are unavoidable in the visual and conceptual realms of both.  Two of the greatest influences for Brown in the development of new forms of notation were Alexander Calder’s (1898-1976) concept of mobile sculptures and Jackson Pollack’s (1912-1956) abstract paintings.[13]  Calder, considered to be one of the most important and innovative sculptors of the twentieth-century in America, is known for his extensive work in mobile sculptures which moved freely in the wind.  This concept of giving a solid iron structure the freedom to move according to an undetermined source in an undetermined direction was considered innovative and brought new possibilities to the previously permanently structured art.[14]  In 1931 Marcel Duchamp termed this new form of sculpture ‘mobile’ and was later adapted to describe Brown’s notations.[15] Calder’s concept of mobility was to become one of Brown’s greatest influences in discovering new methods of notating his own musical ideas.   Brown favoured the spontaneity of expressionism in performance contained in the concept of mobiles.[16] In Calder’s sculptures, the ‘other sources’ were the wind which moved the mobiles freely and in an uncontrolled manner.  In Brown’s compositions the sources were the improvised sounds by the performer.
Brown commented how the two ideas presented in both men’s works merged to create his graphic notation:
For me, the mobility (or mutability) of the work to be activated during the Performance of the work (as in a Mobile of Calder), and expressed spontaneously and intensely by the performer, as in the immediacy of contact between Pollock and his canvas and materials.  These two elements; mobility of the sound elements within the work, and the graphic provocation of an intense collaboration throughout the composer-notation-performance process, were for me the most fascinating new possibilities of “sound objects” as they had been for sculpture and painting.[17]

When discussing why he composed Folio 1952, Brown referred to the European trend of notating music at the time.[18]  The compositions coming from were written in conventional notation but often contained extremely detailed instructions to the performers.  He observed that these scores were not being performed in as often as they should, one of the reasons being their demand of lengthy rehearsals which he claims were not possible with the orchestras in existence at the time.[19]  The lack of performability of these European scores brought a new perspective to Brown’s own ideas on composing:
The solution, as I saw it, was to refer the notation directly to the performance process itself, in terms of the nature of time itself. The desire to control every aspect of the performance to the most minute degree, having brought us to a position of approximation, and (for myself) needing to use these minute “particles” of durations, dynamics, timbre, rhythm, it seemed natural to notate temporal and sonic particles within a frame-work that the performer could “realize” without the conflict of an “unperformable” and therefore distracting set of measurements.[20]