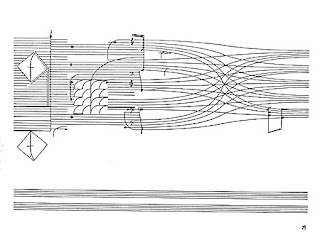 It has been nearly a year since Off the Staves took place at Bangor University. One of the things which I was hoping would happen with the conference was for us to consider alternative forms of notation, including discussions which involve all who work with notation - composers, performers and musicologists.

Last Saturday, I had an inspiring session in Hampstead, London which involved a   four hour discussion of Cornelius Cardew's Treatise - a graphic score published in 1967 inspired by architectural training by Cardew himself and Wittgenstein's Tractatus.  The meeting was led by Jane Alden (Weslyan University) and included members of the NLCC choir members.  Our intensions were to brainstorm performance possibilities of  this graphic score which until now has only been performed through instruments.  What would happen if a choir were to sing from this score?

The discussion which took place by the performers around the table was fascinating.  We explored the ideas of composition, of composer's intentions, of interpretation methods and of whether there was a 'proper' way of reproducing this music.  After exploring concepts, philosophies and preconceptions of 'conventional notation' and potential hindrances this may create, we spent the last part of our meeting actually making sounds.

Above is p.29 from Treatise,one of two pages which I helped to conceptualise in noise/sound.  After dividing ourselves into four groups, we swooshed, hummed, tapped, moved, whistled and blew, trying to create a panel of sounds which could be used to describe the various shapes on the page in front of us.  After a small 'performance' among ourselves of the results from experimenting, we concluded that in our next meeting, we should collectively decide on a number of sounds associated with certain symbols.

The practicalities of performing this work with a large choir will pose a challenge as we continue to explore new sounds and interpretations with the score.
Labels: 20th century 21st century New Music Thoughts
Follow @ElinaGHamilton