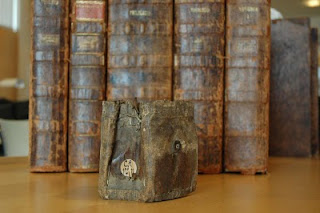 An autumn rose shimmers with sunlight and dew from behind a fence as I walk by the sea which is restlessly churning waves onto its shore.  I clutch my scarf a little tighter around my neck as I realize that the summer breeze has turned into something not as pleasant, but somehow equally as energetic.

I recently took a research trip to the Bibliotheca Amploniana in Eufurt,Germany,  the university library of Erfurt University, famous for being the university where Martin Luther attended in 1502.  My mission was to observe a manuscript which was labeled in a library catalog as possibly being an English source.  As I am currently working on British sources of music treatises from the 14th century, it was a great opportunity to consult this manuscript and see what it might reveal and I eagerly set to the task of examination.  I found great pleasure in turning the pages of this old manuscript, which, according to the dates I found within it, was used for over a hundred years.  The manuscript contained mostly astronomical works and charts of stellar and lunar locations throughout Europe; Rome, Paris, Alexandria, and even the little town of Erfurt, which I was quickly falling in love with.  Number after number was recorded with the precise geographical location. Someone's, or multiple someone's, very precise work was quite impressive.  And then, towards the end of these astronomical treatises was Johannes de Muris' Musica speculativa, a work which explains music through mathematical equations, followed by a mathematical treatise which was used for many centuries, Boethius' 6th century De institutione arithmetica. One of the questions for my PhD that I have been curious to be answered is how this type of compilation treatise would have been used.  So, in this particular manuscript, I was delighted to find glosses - comments or additions made by later scribes - and underlinings and crossed out sections which revealed some interesting things.

One particular reader caught my attention as I traced his very distinct purple coloured underlining.  I discovered the 'purple reader,' as I nick-named him, in Musica speculativa  and began to wonder if he had underlined some of the other books which were compiled in this treatise.  To my sheer joy, he had indeed followed through most of the works on astronomical and mathematical books throughout the manuscript.  Then, I began to wonder exactly what types of passages he was underlining - were they important statements which were necessary to know for the discipline or were they facts which were important to highlight?  The further I examined the reader's underlining habits, the more I realized that he was specifically underlining quotes that were placed within these treatises.  It is not uncommon to find a music theorist quote a saying from Aristotle (especially in the 14th century), from a number of authoritative texts, or a Biblical passage and it was just such quotes which the 'purple reader' seemed to be interested in and nothing much else (at least in his underlining) because once the quotes were underlined, he seemed to leave the rest alone.

Why did he underline just the quotes?  Often, only our imaginations can answer that question for those of us studying these works in the twenty-first century.  Perhaps he was greatly impressed with them and wanted to emphasize them especially, like many of us do even today when we are impressed by someone's writing.  Whatever the case, tracing the underlining pattern of this 14th/15th century scholar in the library which the manuscript has been sitting for centuries was a most inspiring and educational experience for me in trying to understand the intellectual traditions of medieval music theorists.  I hope to return to Erfurt once more in the future to find more 'purple readers'.
Labels: History Ideas Medieval Manuscripts Writing