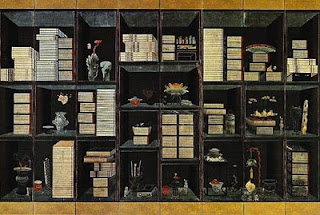 Eleven months into the research


At the end of this month, I will have been a PhD student for a year and I have to say that is has been one which has been largely productive and interesting, keeping me busy and engaged.  I handed my MA dissertation in at the end of September 2009 on a Friday, only to start my PhD on the following Monday - I was quite eager to begin my big project!

The year was spent at many conferences including one which I organized myself 'Off the Staves' at Bangor University.  It was filled with learning Latin, trying to get to a level that I can be comfortable reading and comprehending my complicated and yet very interesting texts.  I analyzed my texts, although still at a large scale, which will merit much more detailed study in the coming months.  I spent hours in the evening at the library, learning what others have written or have been interested in the same or similar time period and topic. I managed my time between teaching undergraduate classes, instructing piano and theory, while occasionally finding time to fit in hiking the wilderness of Wales and visiting interesting places.

At the beginning of the year, I scoped possibilities for research and came up with the following:
My Ph.D research focuses on an examination of music treatises from and around the 14th century. Although the content of these treatises are studied and well known to musicologists, it is unclear how exactly these may have been used in an educational environment at the time of their compilation. My research will attempt to shed light onto an as yet little understood aspect of late-medieval music education: What types of musical education was available? What was taught, by whom, and for whom? What didactic methodologies were used to communicate different musical skills?
These questions beg special interest, especially in the early 14th century, a time of conflict between old and new musical paradigms. Spurred on by an experimental impulse, a corpus of innovative music theory emerged, which aimed to revolutionize concepts of notation, rhythm and counterpoint. The radical break with traditional practices propagated under the auspices of an ars nova (new art) resulted in a heated controversy with theorists of a more conservative outlook who remained steadfast to received wisdom, polemically branded ars antiqua (ancient or antiquated art).
My research examines treatises in view of their didactic applications and methodologies. Such a contextualisation is needed, for, in contrast to prevailing views, these works were perhaps not embedded within an university educational environment but used in a much different setting. Other than instructing students of the speculative nature of music, their specific purpose of use remain vague. Moreover, the so-called ars antiqua treatises often exhibit very original features which have been surprisingly overlooked. I am currently focusing on three British treatises: Walter Odington's Summa de speculatione musicae, Bodley 842, and the Quatuor principalia.

The biggest, and most daunting if not quite exciting, thing I have discovered has been the fact that there is plenty of work for me to do in the next two years when I hope to submit my findings.  Year two is going to involve similar work as my previous one but in much greater detail. I have four main topics which will divide into four chapters for my theses: an examination of how music fits into the Quadrivium to help our understanding of how music featured in the larger educational context in the Middle Ages; an examination of common terminologies and concepts within music treatises both from the continent and Britain (concepts I am interested in finding out more concern the question 'quid est musica' (what is music?), inclusion or exclusion of specific references to authoritative figures from the past, etc.); a detailed examination of Walter Odington's Summa de speculatione musicae which was greatly praised in the past by scholars, most notably by scholars from the 18th and 19th centuries; and finally an examination of how compendium treatises compiled in Britain contain Odington's work along with other important texts.  I wish to show through these four main concepts what the current trends in music theory were in the 14th century as well as how important Odington may have been in his own time. I have much work to do in bringing all of these aspects together but am optimistic that they will shed light to things that currently remain a mystery to many of us.
I will be writing several papers to give at major conferences this year (one being the Medieval Renaissance Conference in Barcelona, Spain) helping me to solidify my ideas towards chapters for my thesis that will result from my research.  In June 2011, I am also hoping to co-organize a specialized conference focused on 14th century treatises.

Alongside my medieval work, I intend to carry on holding discussion sessions with students through the Commaradorie of New and Innovative Music which may include a field trip to the Huddersfield Contemporary Music Festival in November.  I might even indulge in my secret (well, not so secret really!) love of early keyboard instruments, especially after having recently had the pleasure of seeing the Cobbe Collection of composer instruments at Hatchlands (seeing Chopin's most favored London piano was quite exciting to say the least!)
All in all, I believe this next year will pose many challenges as I continue to travel back into time and dig up interesting facts concerning medieval music.
Thus endeth the ramblings from a 21st century scholar.  :-)