Everyone has a hero, especially when they are teenagers.  For most girls of 15, those heroes are super-star pop singers who dance, sing and perform with great flash and bling. For me, it was a Chinese pianist named Yundi Li.  I was getting rather serious myself about my own piano playing when I watched in awe the Chopin Competition held in Warsaw, Poland.  I was inspired greatly by the competition, as young, amazingly talented musicians stepped forward and displayed their best effort in their interpretation of Chopin's wonderful music.  I can perhaps safely conclude that Chopin's works are a first love for nearly all of us who call ourselves pianists.  There is something so amazing that Chopin was able to capture on paper for us to reproduce: the melodies, the passion, simply the way the pieces fit into the hand, are more than satisfying when playing at the piano.  I had recorded the competition on VHS and remember watching it over and over again, annoying my family with yet another Chopin ballad streaming through the house - but it was wonderful!

When Yundi Li made his tour through our town in Japan, I could not miss the opportunity to go and see him.  I was seriously in love with this pianist, along with the rest of the entire world.  The performance that night was one which I will remember for years to come.  Again in Portland, I had the chance of hearing him twice.  It was at this time, however, that I remember finding his playing had changed and that the young and innocent sounds which I had remembered coming from that black instrument in front of him somehow had lost its initial charm.

Today, when I read this article in the NY Times, I was saddened by the report.  Of course I was not there to hear him, and although Steve Smith seemed less than impressed with his playing, the audience seemed to like what they heard.  I wonder which should be believed more - the critic or the audience?  Perhaps somewhere in the middle?


New York Times 23 May 2010
Shedding a Name, and Perhaps More
by Steven Smith 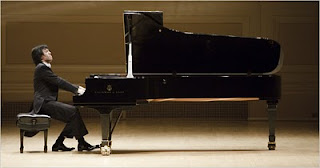 Just why the talented young Chinese pianist Yundi Li is now opting to go by his first name only, like Madonna or Midori, is anyone’s guess. Perhaps, having signed with the EMI Classics record label, he wanted to establish a break with the sober persona of his outstanding albums for Deutsche Grammophon, released in the shadow of a more famous and flamboyant compatriot and label mate, Lang Lang. EMI has experience with this phenomenon, having tended to the career of the violinist Nigel Kennedy once he had decided to be known as Kennedy.

If only Yundi’s metamorphosis had ended there. Last November, he was to play a recital during Carnegie Hall’s Ancient Voices, Modern Paths festival of Chinese music and musicians, with Mr. Lang the most prominent representative. That performance was postponed; instead, Yundi arrived at Carnegie Hall on Thursday night with a Chopin program.
Chopin, understandably, has been inescapable this year, the 200th anniversary of his birth. And Yundi’s connection to the composer is hardly superficial. In 2000, at 18, he became the youngest pianist to win the prestigious International Frédéric Chopin Piano Competition in Warsaw. He was also the first Chinese winner and the first pianist to be awarded first-prize status (sometimes no first prize is awarded) in 15 years. Hardly slight accolades.
Still, Thursday’s recital offered more questions than answers. That Yundi retains the sovereign technique with which he first commanded attention was clear in note-perfect flurries and thunderous climaxes. But the intelligent engagement that initially set his playing apart from Mr. Lang’s gaudy efflorescence was in short supply during an opening set of five nocturnes; elastic phrasing was often thwarted by murky pedaling.
An audience that exploded after each piece surely contributed to a lack of sustained mood. Yundi warded off interruption during the Andante Spianato and Grande Polonaise — the andante deftly spun, the polonaise puckish and mercurial — but applause erupted again before the final notes.
The second half of the program started much the same way, with audience effusions trampling the final bars of the four Opus 33 Mazurkas. Among these, the third stood out: melting loveliness gave way to robustness, yielding a net impression of wistful nostalgia. The first movement of the Sonata No. 2 was a tumultuous conflict of darkness and light, and Yundi’s expressive shading in the second movement was persuasive. But the famous funeral march felt oddly numb, and the finale passed in a blur.
After concluding with a splashy Polonaise in A flat (Op. 53, “Heroic”), Yundi returned for two encores: “Rosy Clouds Chasing the Moon,” a pentatonic Chinese folk melody draped with frippery, and a lightning-bolt account of Chopin’s “Revolutionary” Étude (Op. 10, No. 12).