Thoughts of Snowdrops from my Cilfach... 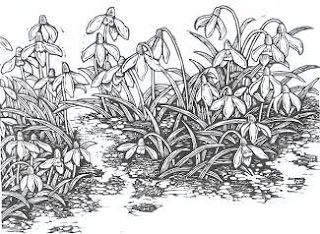 You see, I live in one of the most beautiful places in the world at the moment, completely hidden and largely unknown to the rest of the world. Sure, it is not perfect-we don't have everything you might think a civilized country should offer, but honestly, what do we wish out of life? Are modern conveniences which life might bring our way all we dream about, or do we long for the simple things-those things that money could never buy. I grew up in the countryside of Japan, beneath the beautiful mountains of Togakushi, where we often did not have the most modern films, the most popular lyrics or even the exciting social life that exists in larger cities. But I was always happy and learned to be creative. I learned from a very young age that there are many, many things that money can buy, and that they are nice and pleasant and enjoyable. I also learned that there are things which money can't buy or even come close to replacing; family, friends, music, philosophy, art...these things are invaluable. I cringe when I think that so many people never stop to ponder how beautiful the clouds are in the sky, or how gorgeous that swan in the pond is. To see snowdrops blooming between the fallen Autumn leaves signifying a new beginning, a new life, a pure and clean one that is not damaged with toils or hardship. I spent a great deal outside this weekend in beautiful North Wales, drinking deeply the fresh delicious air, tasting the beauty of the scenery before my eyes. To taste something beautiful with your eyes is a Japanese expression which seems foreign to Western thought, and yet so appropriate for the event.  As the turquoise sea and green grass beckoned me to move forward, this is what went through my mind.

One of my childhood heroes was Booker T. Washington (1856-1915), an African American who had the unfortunate fate of being born in a very ugly time in American history. Born of a white father, of whom he never really knew anything about, and a black mother, Booker did not have the most fortunate of circumstances at the start of life. A story about Booker has always stuck with me. As education for African Americans was not encouraged, it was difficult for him to find a place where he might satisfy his hunger for knowledge. When he finally came across a particular school, where he  heard accepted African Americans, he met with the principal, only to be looked down upon, again, because of his skin color. Instead of offering him a place to study, she asked him to sweep the school room, as classes had  just finished for the day.  Booker, highly disappointed that he had not even had a chance to speak up to explain that he desired to attend school, sat down in the classroom feeling utterly discouraged and extremely hopeless. After a long time, he eventually picked up the broom in the corner of the room and  began to sweep, not just once, but twice, three times, and dusted as well.  What he did not know was that the principal stood there watching him from outside the classroom.  She recognized his determination, and of course he stayed at the institution to become one of the best pupils they had ever produced. Booker went on to found his own institution, Tuskegee Institute, and became one of the leading African Americans to fight for the right of equality.  Booker was determined and did not let any small task before him go unnoticed.

What I like about this story is not that it is warm and fuzzy, but because it shows a quality of human determination. The principal did not show him respect, but Booker earned it through going beyond what was expected of him.  That, in my mind, shows greatness. It shows respect for another human being.  And ultimately, it shows respect for one-self.  I feel there seems a lack of respect for one-self today amongst my generation.  I feel that we have forgotten what hard work is about and that it is honorable to present yourself  well to others.

That is what I thought today as I saw a beautiful snowdrop peeping its head through the dead leaves - pure, unstained and innocent.
Labels: Simple Living Thoughts
Follow @ElinaGHamilton