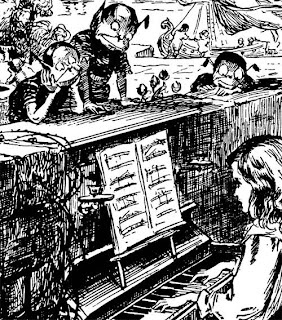 Anthony Tommasini of the New York times recently wrote a piece reflecting the musical activities of the last decade. In his article he focused mainly on three major cities of America: New York, San Fransisco, and Los Angels. Gauging his perspective from the events of 9/11, he looked back at this past decade and the changes, both good and bad, on the classical music scene.
One section in particular caught my attention as I was reading the ups and downs which have taken place.

In discussing the promotion of music education for children, especially as music education continues to be shaven from school budgets, Tommasini addressed the need for musicians in top orchestras from these cities should be part of a larger community of music education. Places like Julliard and Carnegie Hall have in the past and are still trying to reach out to children and the community who might not have easy access to orchestral experiences. In reaction to this, he writes:

A musician must be able to connect with people and take music outside the concert hall. The goal is not necessarily to direct members [of the orchestra] into public school teaching but to make them good musical citizens.

In the twentieth century - which indeed was only following in the foot steps of what previous centuries were building up to - classical music was placed in the concert hall, and in turn, became something which to most could only be appreciated at a distance. Although technology has enabled many listeners to enjoy great works by great orchestras on their commutes on public transportation, this did not necessarily result in a surge of live classical concert goers.

When, though, did music ever become disconnected 'with people'? How can music be separate from humans? Can it still be called music, when placed at such a distance?

Music should be about people, about the interaction between one person and another - composer to performer, performer to audience, audience to performer. It should never be left on the stage, icy and cold, unreachable to those who are not a part of it. When I gave concerts, I always enjoyed the discussion which took place, explaining the work, talking about how it was composed, and then the tension the audience held as I lingered on a dominant-seventh chord only to finally be brought back to the long awaited home-key. However, even as I remember back to my own earliest piano lessons I received, I do not recall being introduced to a man named Beethoven or a man named Mozart. They were just names of the books, as far as I was concerned. There was a distance between the beautiful music I was performing and the person who composed it. When I began to teach, I brought in maps of Europe to point out to my students where Germany was, where France and England are situated, or would talk about a specific time that Beethoven wrote the sonata and that the piece was not composed so that you could pass your level onto the next and boast to your friends the next day that you had attained your 'level' through playing such and such a piece.

Musicians who work in the major philharmonic organizations should not have to be 'made into good musical citizens' - they should already possess the urgent desire to share the knowledge which they have been blessed to receive to others, to those who wish to possess the same. Tammasini concludes that the long-term impact of these 'new' initiatives cannot be determined. He writes as if placing music back into the hands of people is innovative, as something which is a phenomenal idea. They are really not 'new' but rather the way music ought to be shared. I certainly do hope that we put music back where it is meant to be - with the people.
Labels: Thoughts Writing
Follow @ElinaGHamilton