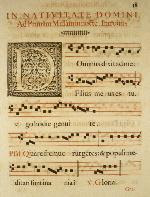 Margaret Bent (University of Oxford)
The motet around 1500

Early music studies do not always rank high on the agendas
of university music departments these days. There are
of course exceptions, a recent one in Britain being the
appointment of Thomas Schmidt-Beste to the chair at
Bangor, followed by the appointment of an additional
expert in medieval and Renaissance music, the establishment
of a Centre for Research in Early Music ( ‘ CREAM ’ )
and the hosting of the ‘ Med-Ren ’ conference at Bangor
next year (24 – 27 July 2008). The dynamism of the new
team was apparent in a flagship conference held there, 29
March – 1 April 2007: ‘ On the relationship of imitation and
text treatment? The motet around 1500 ’ .

Those years are characterized by momentous changes
in music history, musical style and attitudes towards
music. This perception has long been central in music
historiography; a recent revisitation by Rob Wegman
identifies this as a period of ‘ Music in crisis ’ . 1 Following
a 1979 article by Ludwig Finscher cited as a starting point, 2
the motet has received special attention with focus on
issues of text declamation and imitation, and around one
composer, Josquin Desprez. This focus has helped to
define the issues, but it has arguably diverted attention
from other important questions and other composers.
The stated aim of this conference was to review the various
directions of enquiry that have accumulated since
Finscher’s article, and to re-examine the preoccupation
both with issues of imitation and texting and with the
dominant figure of Josquin.

It was one of few specialist conferences in the UK in
recent years devoted to this period and perhaps the first to
focus on the motet as a central genre, and indeed as a
driver of music historiography. The overall quality of the
papers was gratifyingly high; indeed the line-up of speakers
included nearly all the leading names in the field.

Together they gave a real sense of how musical repertory
at this period works with respect to counterpoint, texture
and imitation. Nevertheless, despite the efforts of the organizers,
relatively few papers addressed the central question
of detailed music – text relationship head-on; without singling
out individual cases, most were much stronger on
musical techniques, and their classification and historical
direction and context, than on note – syllable relationships;
and some that did address text and accentuation were less
stringent in their methodology. There was little or no
mention of earlier work which has addressed pressing
problems of text declamation, including seminal contributions
by three conference participants, Schmidt-Beste, Fallows
and Edwards; had these been taken account of, more
papers might have moved the investigation further.

In an insightful paper, Warwick Edwards questioned the
idea that ‘ humanist ’ aspirations governed the way composers
treat motet texts c .1500, and whether later humanists
valued the way their forebears set words to music. He distinguished
multidisciplinary competence from the misuse
of ‘ interdisciplinary ’ , a point that often needs to be reaffirmed
today. He introduced the useful term ‘ syllable
deployment ’ rather than text underlay. He warned against
anachronism: ‘ the notion of text “ sensitivity ” is one that lies
altogether outside the sphere of musical thought around
1500, and … to insist otherwise is to encourage the formation
of value judgements that to musicians of the time
would have seemed perplexing ’ . If we see affective sensitivity
in imitative passages, that is because these tend to be syllabic
and audible. In other words, the idea that they ought to
respect classical declamation is ours rather than theirs.

As for the texts themselves, Leofranc Holford-Strevens
has raised the game for musicologists, and did so here in
a learned and entertaining paper which explained the
obscurities of Regis’s Latin texts through both overambitious
composition and corrupt transmission. Several
papers drew attention to the apparently clumsy treatment
of words at the supposed turning point of c .1500, with
some raised eyebrows as to how this could happen in the
age of humanism, a question already firmly sidelined by
Edwards. Such puzzlement is nothing new; earlier waves
of literary humanism have misled musicologists to similar
observations for the preceding two centuries. Part of the
answer may lie in different regional pronunciations of
Latin (as Fallows has shown for Italian and French, and
Holford-Strevens in several papers ) but it may be that
metrical divisions were not necessarily correlated with
word accent in the ways we now expect — and as Stephen
Rice assumed in his paper on ‘ reverse ’ accentuation, i.e.
texting that appears to contradict the tactus. Two younger
scholars succeeded in bringing text and music together,
Christian Leitmeir and Remi Chiu, but even they dealt
more with overall presentation of the text than with
details of declamation. Intuitive deployment of syllables
by singers was addressed in the article by Edwards already
cited (in n.4), a discussion that invites continuation.

Rob Wegman extended his thesis of a ‘ radical transformation
of compositional practice, … a shift from “ cantus
fractus ” to “ cantus compositus ” ’ , or as he vividly put it,
‘ splitters ’ vs. ‘ lumpers ’ . With many examples, he developed
the contrast between the earlier paradigm of an
underlying contrapuntal scaffolding to be elaborated
by ornamental fragmentation, unconducive to imitation,
and the opposite process: open-ended motivic ideas
threaded together to generate a contrapuntal texture
that invites imitation. Consistently with this view, Mary
Natvig saw the canonic duos in Busnoys as backwardlooking,
not connected to the new kinds of imitation.

A highlight, as anticipated, was Joshua Rifkin’s keynote
paper ‘ A black hole? Problems in the motet around 1500 ’.
While the Odhecaton fell into the anthologizing tradition
established by contemporary manuscripts, the Petrucci
motet volumes lack forebears. Despite motet sections in
contemporary manuscripts, no late 15th-century source is
devoted solely to motets, and standard reference works
largely ignore the period following the death of Du Fay.

Many of the motets in manuscripts and prints c .1490 – 1510
are anonymous, while Petrucci’s Mass collections broke tradition
by collecting single composers. Against a background
of precisely defined features of the new motet style, with the
steady inexorability of vintage Rifkin, he unfolded a detective
story of Mouton’s career and datings, relationships with
the French royal court, and closed in on Josquin with the
sure touch of the hunting dogs of his main historical anecdote.

Did Josquin’s stylistic change in the 1490s lead the
development or ride with it? His individual style was judged
to play a key role, if not that of ‘ onlie begetter ’ of the French
motet style. The ‘ black spot ’ in Josquin biography neatly
filled the black hole of the title.

Evidence for associating Moulu with the French court
rests on his lament for Anne of Brittany and his motet
Mater floreat which lists famous composers, living and
dead. In a model presentation of historical, textual and
musical testimony, David Fallows challenged earlier claims
for the provenance and dating of this piece, narrowing it
to 1508 – 11 and suggesting a musicians’ gathering in Meaux
in 1509. The French court was also central to Jennifer
Thomas’s paper, which departed from her abstract to
reassess the much-discussed authorship of Absalon fili mi .
Févin, Mouton and Gascongne were also the subjects of
papers by Marie-Alexis Colin and John T. Brobeck. In
other contextual papers Laura Youens expanded Honey
Meconi’s list of motet-chansons by one (by Courtois), and
localized the point of contact for the northern French/
Flemish motet-chanson at Cambrai. Melanie Wald
reflected on the liturgical-theological implications of
motets that combine a tenor cantus firmus with different
texts. Richard Wexler emphasized the private rather than
formal character of the Medici Manuscript motets. Jane
Hatter related Marian motets to the Venetian scuole .
Several papers addressed compositional influence or
‘ non-central ’ repertories. Murray Steib identified
Josquin’s influence on the older composer Martini. Adam
Gilbert detailed the influence of Isaac and Josquin on
Senfl. Daniele Filippi reported on Gaffuri’s motets,
Kenneth Kreitner on the late appearance of the motet in
Spain, and Lenka Mráçková on motets in the Central
European Speciálník manuscript.

Motets in more than four parts played a conspicuous
part. Six-part motets by Josquin formed a trio of papers:
Bonnie Blackburn elegantly reinstated the disputed sixth
voice of Huc me sydereo , and Jaap van Benthem analysed
his reordering of Poliziano’s verses in setting O virgo
prudentissima. In a probing and pertinent paper, John
Milsom extended his ongoing investigations into compositional
vocabulary and stretto imitation in ‘ Virgo salutiferi
and the combinative impulse ’ developing Rifkin’s
idea of motivicity. The clear and rhetorical projection of
the text emerged as an inseparable but secondary impulse,
a conclusion entirely compatible with Edwards’s paper.
Sean Gallagher documented five-part motets; starting
with Regis and centred on Petrucci’s Motetti a cinque of
1508 he considered ‘ not only the kinds of motets composers
were gravitating toward, but also those they were
moving away from ’ . Although earlier 15th-century
English compositions had used five voices, often associated
with canon, the impulse later in the century was
closely connected to the use of an axial cantus firmus,
requiring management of multiple voice ranges in an